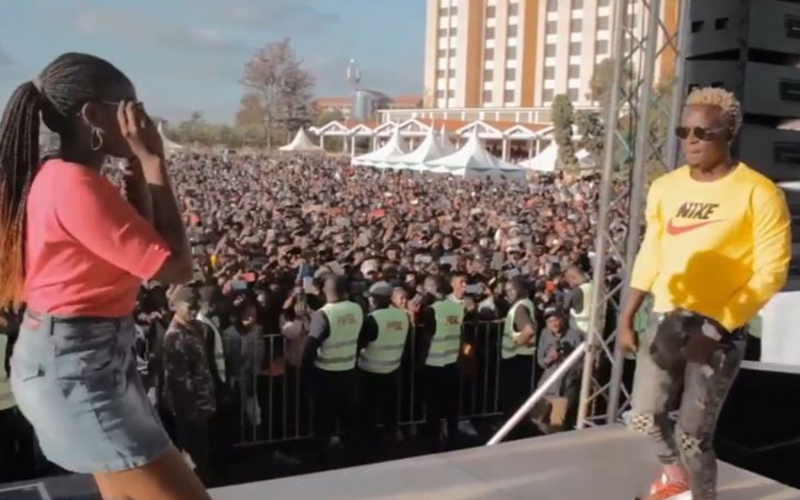 Singer Willy Paul is on cloud nine buoyed by a great turnout at Chuka University.

A 35,000 volts jolt which saw Willy Paul today, October 5, share the event's video which he claims is proof enough that he has a lot of clout in the industry.

In an act of defiance that he would not bow to individuals he claims are curtailing his career, Willy Paul dropped the F word more than Eminem did in The Real Slim Shady.

Willy Paul, or, Pozee as he is fondly known, claimed that the reason some of Kenya’s top acts are not booked for shows was because of the cartels’ firm grip on the industry.

“Too much love F****K all the cartels in this f****kn industry. F***k all the industry cartels, look at all the love in this video!! Ever wondered why some of your favourite artists are not in some events that you'd expect them to be in? It’s because in Kenya if don’t dance to a cartel's tune then you are an enemy,” stated the Saldido Records boss.

He narrated that any attempt to break away, to be different or aim higher in the music industry is interpreted by the group as enmity.

Willy Paul then went ahead to urge his 1.1 million-strong Instagram followers to shame the alleged cartels.

"Yaani it's about who knows who!!! What’s happening to our industry??? Let’s mention names. This has to stop!! If we don’t fight now, the next generation and our kids are gonna suffer very badly!” He added.

The singer signed the strongly-worded statement with a bold declaration that he cannot be written off.

“I’m here to stay coz the love and amount of work is real!!”

Here is the video: