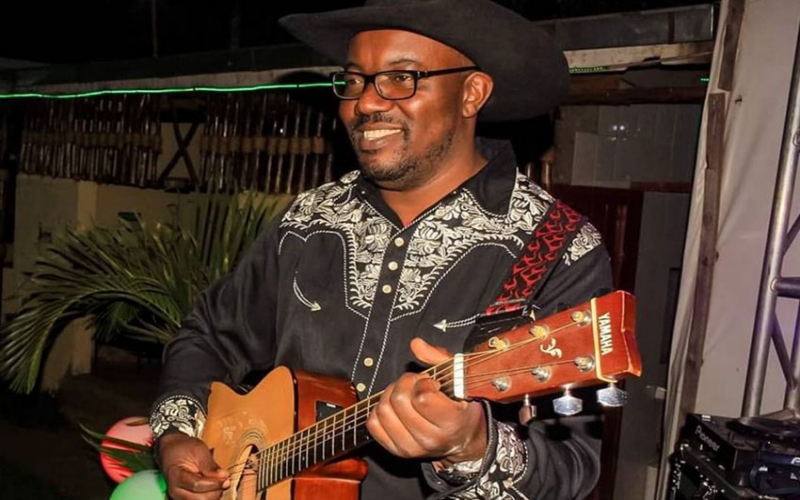 It is at Galileo Lounge in Westlands, Nairobi, on a cold Wednesday night and revellers have assembled to quench their thirst and stimulate their moods while singing along to resident country music maestro, Sir Elvis Otieno.

Sir Elvis, Kenya’s king of country music as he is popularly known, plucks the strings with vigour as he steals glances at the pleasure seekers accompanying him in the musical journey to keep the cold away.

But it is no ordinary Wednesday. Sir Elvis, donning the genre’s trademark cowboy hat, is also here to sharpen his skills further ahead of the Texas Sounds International Country Music Awards in Texas, USA, from October 17 to 20.

He is the only nominee from Kenya scheduled to compete with 23 other renowned international country music performers.

In the Texas Sounds website, where the announcement has been made public, Sir Elvis is reputed as a bearer of a big powerful voice with “a rich, smooth, and powerful baritone who has conquered most of Africa with his genuine country renditions.”

Sir Elvis’ performances indisputably live true to the description and he is adored by regular patrons of Galileo. Even those who do not know the lyrics of some of the songs he performs with perfected synchrony nod to the tunes and blink their eyes to the rhythm of the scintillating lights.

On this day, the hedonistic audience sings along as the guitar sounds reverberate across the lounge. One reveller in an oversized free-flowing shirt rises to his feet as he cautiously places his glass of beer on a table.

The music is taking effect on him and he accompanies the tune by tapping his feet on the concrete floor before pulling out a creamy kerchief from his pocket. With it, he leisurely wipes invisible tears off his eyes. “Country roads, take me home, to the place I belong, West Virginia, mountain mama, take me home, country roads…,” sang the lovers of classical tunes alongside the artiste as he performed a rendition of John Dever’s ‘Take me Home, Country Roads’.

As his talent takes him “home in Texas” where he will meet other great performers, his fans continue complimenting the performer who has remained steady in his music career for many years.

Catherine Ndonye, KBC English Service ‘Sundowner’ show host for 23 years now, reminisces the first time she listened to Sir Elvis. She says it was the work of an expert.

“When he picks up his guitar and gets down to the singing business, the music monster in him comes alive and that I can only sum up in one phrase that he is the best. He majors in bringing the best out of other people’s music,” says Ndonye, adding that she was waiting for the award.

“I first met Elvis in 2010. I had never met him or heard him perform. I couldn’t believe my ears. At the car park I could hear music but I thought it was some country music playing from a Compact Disc or something,” recalls Ndonye.

“I just didn’t think any Kenyan had the ability to sound exactly like the original singers of some of these country songs. I met Elvis and instantly developed full confidence in his ability.”

She says she has invited the artiste to a number of Sundowner dates and he will remain the main performer in other future events.

“He is still our main performer at events even this year when we start a tour of the counties ‘Sundowner Sunset Date County Edition’,” says Ndonye who is among those who midwifed the rising to stardom of Sir Elvis.

Ndonye exudes confidence that Sir Elvis has what it takes to win the award.

Deejay Pierre Kinyua, who has been working with him, says that Sir Elvis will emerge victorious in the competition.

“He is the greatest country singer in the country and he has his own compositions. He is gifted with a voice that puts him in a special class of his own. He will triumph,” says Kinyua.

At Galileo Lounge, whispers of his nomination spread fast and some revellers could not hide their joy as they shouted congratulatory messages as Sir Elvis performed on stage.

Brian Mwangi, a patron at Galileo says he is at home when listening and watching the artiste perform.

“I love Mugithi songs (Kikuyu music genre similar to country music) and listening to Sir Elvis is entertaining because it sounds like enhanced Mugithi. I feel it homelier when a local artiste sings foreign songs, at least I can identify easily with the tunes,” he says.

Sir Elvis thanked his fans for their continued support and expressed confidence that he will emerge victorious in the competition.

He said his nomination was due to his single hit “Loving man”, which received great admiration internationally, especially after he was featured on CNN.

“This is not just a competition but a festival as well, it is two-in-one and that is what makes it unique. The organisers have scheduled to have me present the song as well as other songs if I wish to. It will be an interesting experience,” Elvis said.

He said the platform will be an opportunity for artistes to meet with songwriters and producers, who will be scouting for artistes they can work with.

“The festival might not have a very big impact but whatever happens there will be felt across the world. It has the capability of opening up many doors,” Sir Elvis said.

But since the organisers were not funding his trip to the competition, Sir Elvis said he had started raising funds to facilitate his participation.

“Some fans have started sending their goodwill already. It is overwhelming,” he said as he showed an Mpesa message from one of the fans who sent a meagre Sh100, which Sir Elvis said meant a lot to him.

“It means the whole world to me that such a fan sent what he could manage. It is satisfying to see how people appreciate my work.”

Meanwhile at Galileo Lounge, the rhythm goes on as D-Day nears.